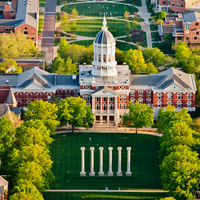 Jesse Hall is the main administration building for the University of Missouri. Built in 1893 after Academic Hall burned to the ground, the building is one of the major symbols of the University. It is located at the south end of the David R. Francis Quadrangle, often called simply "The Quad." Jesse Auditorium, a popular entertainment venue for touring acts, is located at the east end of the hall.

“The Creation of the President’s Cabinet”

"Divided Houses: The Long History of...

Prof. Ken Owen’s Kinder Institute Distinguished Visiting Research Fellow lecture will look at the dozens of movements before and after the Confederate States...

“Slavery and Politics at the University of...

“Constructing Colonial Identities and Power in...

It was very eye opening.